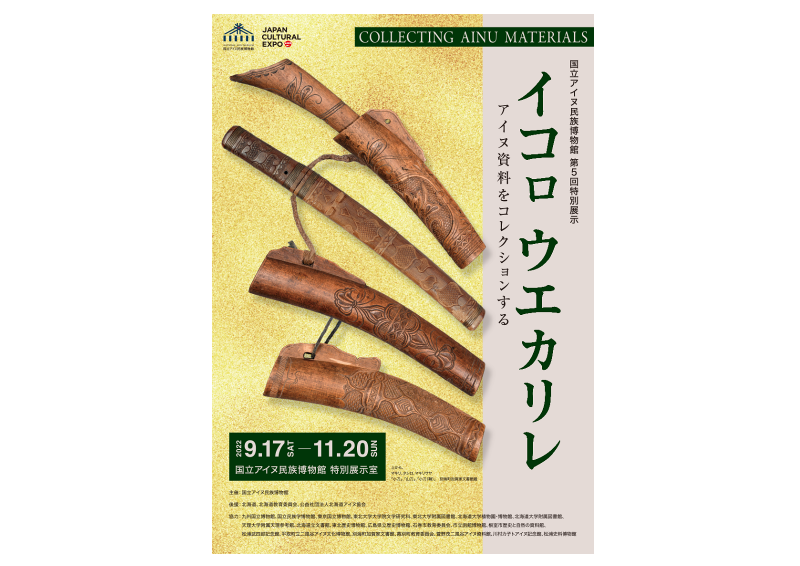 Outline of the Exhibition

This exhibition sheds light on Ainu materials and their collectors. Focusing on folk materials, it introduces how those collections known as “Ainu collections” were created.

The items in this exhibition we refer to as “Ainu materials” are indispensible for talking about the history the Ainu people have travelled from the past to the present, and the Ainu culture they have inherited. Ainu collections are defined here as Ainu materials that have been collected or produced by individual collectors or organizations for a specific purpose against the background of the times and social conditions under which they were collected.

It is important to remember that parts of some collections were collected in a manner that went against the will of the Ainu people. The museum in no way endorses or approves of this past practice. The Ainu materials themselves that have been preserved to date, however, are still indispensible for talking about Ainu history and culture.

The museum endeavors to create exhibitions that communicate Ainu history and culture, verifying the history behind Ainu collections as much as possible, and selecting Ainu materials that do not damage the dignity of the Ainu people.

The museum endeavors to create exhibitions that communicate Ainu history and culture, verifying the history behind Ainu collections as much as possible, and selecting Ainu materials that do not damage the dignity of the Ainu people.

【 Closed on 】
Mondays (when Monday is a holiday, the museum will close on the next business day).

To be admitted to the Special Exhibition we recommend you designate the day and time of your visit online (Advance Registration). [ Online Reservation is here ]

COVID-19 Countermeasures ：
The museum is working to prevent the spread of infection based upon the guidelines of the Japanese Association of Museums.
We are continuing the wearing of face masks at all times, and thorough hand disinfection.

* Prices in ( ) are group discounts for 20 people or more.
* Admission is free of charge for visitors with disabilities and one caregiver. Please present documentation upon entry.

I   What are Ainu materials?

When talking about the history that the Ainu people have experienced from the past to the present, and the Ainu culture they have inherited, Ainu materials are indispensible.

Folk tools used in daily life in the past, things written about events and customs concerning the Ainu people and things written by Ainu people themselves, pictures, photographs, film, recordings of oral literature and narratives, archaeological remains of the Ainu people and their ancestors – all of these are Ainu materials. They also include new forms of expression being created today that actively incorporate inherited techniques and knowledge. Beginning, of course, with the Ainu people themselves, Ainu materials have been created by many different people. These materials are not bound to the past, but continue to be created today, and their volume and variety are always increasing.

When the Tokugawa Shogunate began to rule Japan in the 17th century, Ainu and Ezochi began to be described as being on Japan’s “frontier.” From the 18th and 19th centuries, alongside the intention to expand that can be seen in the emergence of the Shogunate’s awareness of its own territory, this description began to appear in many documents. This was the beginning of Ainu collections.

At this time, Ainu did not make records about themselves, nor did they make portraits. For this reason, all written and visual descriptions of the Ainu were made by non-Ainu Others. A more detailed picture of the Ainu, who had been widely known through an image of a “exotic” people who live in the north, began to emerge with more information from the Shogunate’s surveys of Ezochi. At the same time, woodcraft and other items made with the skilled techniques of the Ainu began to circulate among the educated and common people alike as exotic souvenirs. The “foreignness” of the Ainu and Ezochi appealed to the tastes of Wajin (ethnic Japanese) society and added an exotic accent to people’s lives at the time.

In building a modern state, the “development” (kaitaku) of Hokkaido became an urgent priority for the Meiji government from the late 19th century onwards. For the Ainu people, this was an age of dramatic change to their lifestyles through assimilation policies that had a severe impact on their unique culture, and the establishment of national borders that meant forced relocation from Karafuto and Chishima.

The Ainu people became the object of antiquarian curiosity on the one hand, and they came to be compared with “the Japanese” under a set of values that emphasized the “civilization” and “the primitive.” Academic disciplines that contributed to the formation of the identity of the nation-state, subdivided into ethnology, anthropology, archaeology, and others, evaluated and positioned the Ainu people within Japan.

From the 20th century, beauty is identified in Ainu handiwork as craft in the form of embroidery and woodcarving. Folk items relinquished from the Ainu people as their lifestyles underwent change, became valued as craftwork and exchanged on the collection market giving rise to new collectors.

Ⅳ   When Ainu collections are exhibited in museums

Aiming to join the international community, Japan adopted the slogan of “leave Asia, enter Europe.” A growing interest in “Oriental Studies” was formed in countries considered to be the Great Powers at the time. The building of museums in Japan with an aim to promote industry and raise national prestige was linked to the exhibiting of high quality “products” in expositions and the display of progress in “curation” by the Meiji government. In this context, Ainu materials were treated as proof of the success of the “development” (kaitaku) of Hokkaido.

The Ainu folk items that were collected in the early Meiji period came to form the early collections in Japan and they remain extremely valuable today for learning about 19th century Ainu culture. These collections created the base assemblage of Ainu folk tools. Combined with the Ainu collections from the late 19th century and early 20th century as craft and art works, and academic resources, these formed the basis through which the “traditions” of Ainu culture came to be seen through folk tools.

Ⅴ   Ainu collections in an era of diversification

The impact of assimilation policy on Ainu culture was severe. The active cultivation of ethnic consciousness from the end of the Meiji period to the Taishō period led to cultural revival and transmission and Ainu people themselves became involved in the formation of Ainu collections. Through a sense of crisis from the loss of treasured Ainu materials, and in order to pass them on to future generations, Ainu people themselves built museums and collected Ainu materials.

In 1984, the Ainu Association of Hokkaido compiled the Draft Law for Ainu People to improve the status of the Ainu people and appeal to the government. In 1997, the Ainu Cultural Promotion Act was promulgated, and the promotion and dissemination of Ainu culture was furthered. This task has been inherited by the Ainu Policy Promotion Act, passed in 2019, that recognized the Ainu people as an indigenous people. As the situation surrounding Ainu culture has changed from the late 20th century to the 21st, new Ainu collections centering on the Ainu people are being created and diversification is taking place.

No special exhibitions are currently scheduled.

No special exhibitions are currently scheduled.